Blog Tour and Review : Gilding the Lily by Justine John

The Very Pink Notebook is thrilled to be part of Justine John's, Gilding The Lily, blog tour this week.  With much thanks to Justine John and Authoright for involving me in the tour and for a copy of the book.

An invitation to her estranged, wealthy father’s surprise 75th birthday party in New York, sees London-based Amelia and her husband, Jack, set off across the pond to meet a whole new world of family politics.

Amelia, now a successful businesswoman, feels guilty about never liking her father’s women, so does her utmost to give his new socialite partner, Evelyn, the benefit of the doubt. Wouldn’t it be nice if they could just all get along? But there’s something very dark, determined and dangerous about her…

When Amelia’s father, Roger, becomes ill, Jack grows suspicious that there is more to it. Amelia understands why, but no one else will believe them. They travel back to America to piece together the puzzle, but when Roger goes missing, the couple are driven to their wits’ end. It takes a DEA officer and a secret assassin to bring them answers, but the ruthless truth is something no one expected…

I loved the synopsis for this book and thought it sounded full of promising twists and turns.  I wasn't to be disappointed.  Although in a way the plot is a slow burn, it is still written with a pacey and intriguing edge.  Justine John has written a high society, suspense novel with characters who are well placed.  Set in both England and New York I enjoyed racing between the two with protagonist Amelia and husband Jack.  A couple, who are content and happy with their lot in life they also love Amelia's father who resides in New York, despite his taste in women being somewhat questionable.

After making a surprise visit for her fathers 75th birthday, events start to leave a sour taste in the mouth of Amelia and Jack and we are taken on a journey of discovery, for all the characters, as a race against time to discover the truth about his father's partner begins.  Written in both first person (for Amelia) and third for others we are kept in both current and past times, which weaves a tangled web.

John has developed a good set of characters, none are all good or bad, there is a perfect balance of personality traits to make you like them and then be left wondering if perhaps that 'comment' or 'thought' was maybe a little sinister?

For me, the star of the show is the ending however, and it is quite rare that I find that.  I thought I had it worked out and although in part I did I just did not see the final twist coming and was left nodding my head in appreciation to the author. 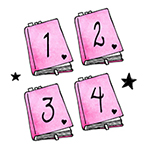 About the Author - Justine John


After over thirty years of working in the corporate sector in London Justine John left the rat
race for the stunning countryside of the Surrey Hills where she lives with her husband, horses and two Dalmatians.