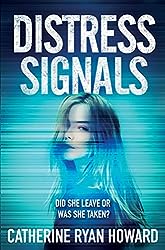 Published by : Atlantic Books / Corvus
5 May 2016
Copy : Received from publisher for honest review
DID SHE LEAVE OR WAS SHE TAKEN?
The Blurb
The day Adam Dunne's girlfriend, Sarah, fails to return from a Barcelona business trip, his perfect life begins to fall apart.  Days later, the arrival of her passport and a note that reads 'I'm sorry - S' sets off real alarm bells.  He vows to do whatever it takes to find her.
Adam is puzzled when he connects Sarah to a cruise ship called the Celebrate - and to a women, Estelle, who disappeared from the same ship in eerily similar circumstances almost exactly a year before.  To get the answers, Adam must confront some difficult truths about his relationship with Sarah.  He must do things of which he never thought capable.  And he must try to outwit a predator who seems to have found the perfect hunting ground...
The Very Pink Notebook Review
Catherine Ryan Howard has produced a brilliant, clever and gripping psychological thriller in Distress Signals with a high body count, wealth of unreliable characters and clever use of maritime law to muddy the investigative process to such a level I am pretty sure I will never be boarding a cruise ship in my lifetime.
Hooked from the very first page, where our narrator, Adam, is plunged into the dark depths of the sea I found myself needing to continue to read and discover.  I loved the way this novel was written, mostly in the first person voice of Adam, the long term boyfriend of the missing Sarah but punctuated with the third person narrative, almost as a completely separate story, of both Corrine and Romain.  I knew the three would eventually come together but until they did I could only guess as to how.  All three viewpoints were intriguing and at times heart-wrenching - particularly those of Romain and Corrine.
Although there are quite a lot of characters within the story it never got confusing, and they all had a hint of the unreliable in them so I was never quite sure who I should be trusting - is Rose really 'telling all' given she is Sarah's best friend and not Adam's, or does Adam's best friend Moorsey have an ulterior motive given he has recently started dating Rose and everyone says how alike she is to Sarah?  Then of course there is the mysterious Ethan and the staff at the cruise company who are clearly lying... let's just say my detective skills were sent in all sorts of directions and I didn't work out what the end result was going to be which made the finale all the better.
Beautifully paced and with a fascinating suggestion of the darker underworld of the cruise industry, Distress Signals is a compelling read that not only looks at the 'who done it' but also the 'why'.
A must read and therefore I give it ... 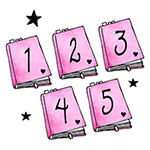